These are some figures that I've painted for a groups build at Benno's Figures Forum. This is half of the figures I have to paint for it. Currently I'm working on the "Light companies" figures and the "Grenadiers".
Enjoy the pictures!

After the Italeri AWI British Light Cavalry I've painted is here the infantry. I've bought these figures in a box of Revell but actually these are re-issues from the Accurate British Infantry.
Painting these was fun but not that easy with all that white on them. But I don't think the final result is bad? Is it?
Enjoy the pictures!
﻿﻿
﻿﻿

Hope you like them!
Gepost door peter op 10:59 7 opmerkingen:

This is a special figure of Caesar and the description on Plastic Soldier Review says the following about this figure: "an Assyrian king and looks to be based on a portrait of Ashurnasirpal II (ruled 883 to 859 BCE). He wears the polo crown and holds aloft his mace as symbol of his office". These figure comes as extra figure in a different set, by name this one: Ancient Egyptian Chariots
So I went looking on the internet to find a picture of this king, how I should paint him. And the result you can see below. Painted with acrylic paints (Games Workshop and Revell).

Hope you like him ;-)
And welcome to the following friends:
Sander from Mon cher Alava, Marmont est perdu and Modus Reg Magni Momenti and BlioRay from Miniatures.
Welcome to my blog!!!!!﻿

After I painted those Panzergrenadiers I had to do something with them. So I thought why not making a little vignette with them. So I did, and took it with me to the meeting at FIGZ. When I was there I decided to put it in competition and see what happened: 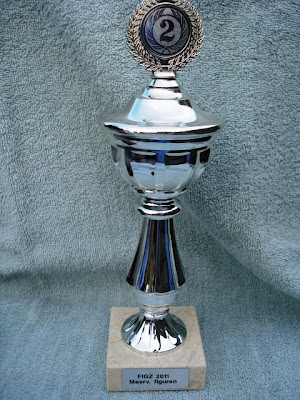 I won the second prize in the Multiple Figures competition, only beaten by my good friend Paul from Paul's Bods. This was his contribution. Congrats with the win Paul!
But what was my contribution? I let you see in a little story. Here it goes.
On a sunny day in the year 1944 two German Panzer grenadiers are walking on the street somewhere in Normandy and then all of sudden they meet a nun. She looks very nervous. They decide to talk with her.

And the Germans went on. But what was the real reason she act that way. You can find the answer in the next pictures:

As allready told everything went right as the Germans gone away, and the brave nun and the three men could succeed in their mission to clear the pad for a succesfull invasion.
﻿THE END
Here are a few more pictures of the vignette. The fountain is from my good friend João from GEM. He has many other nice things in his webshop﻿. Figures are from Caesar, the German Panzergrenadiers (set1), the Partisans in Europe and the WWII British Commandos. 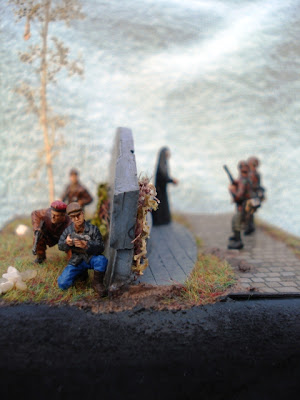 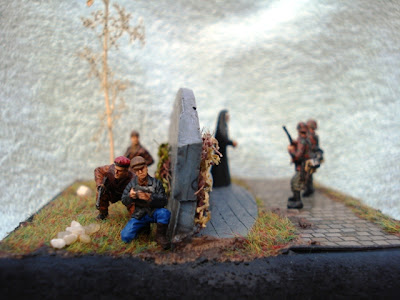 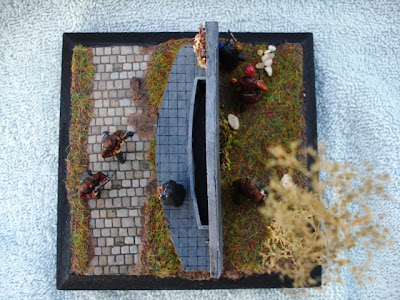 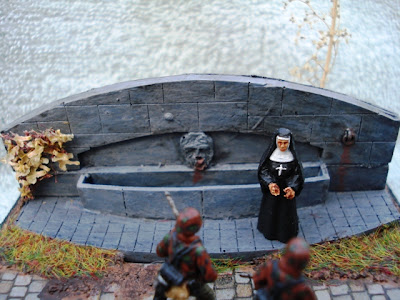 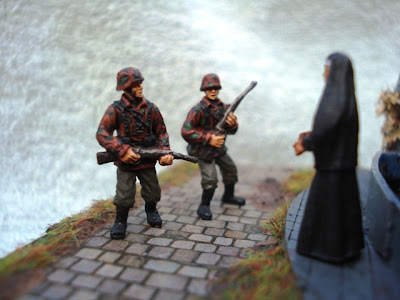 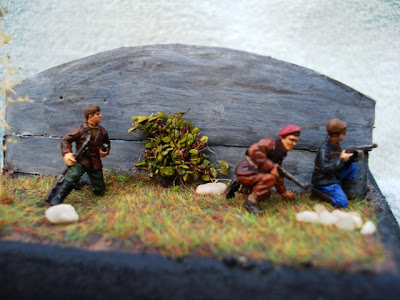 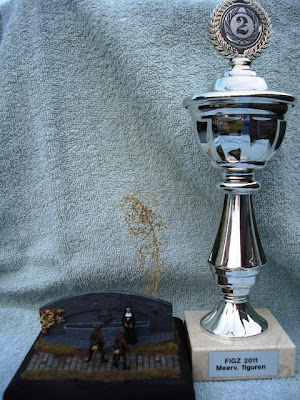 Painting this figure started all with a question on the Bennos Figures Forum from my good friend Maurice from MINI FIGS. The question was if we weren't posting to much Napoleonic figures on the forum. I know he loves more the WWII and Modern period to paint figures from.
So I thought it would be fun to paint a Napoleonic figure in a WWII Camo pattern, and as I was painting WWII German Panzergrenadiers, I took a figure from the Revell Napoleonic Prussian Infantry.
And here you can see the result: 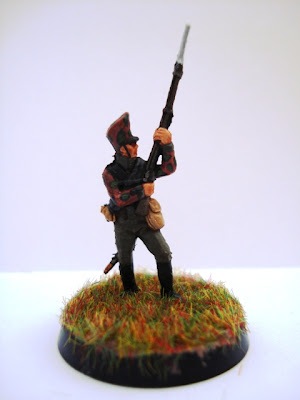 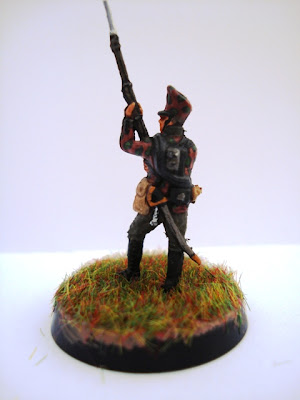 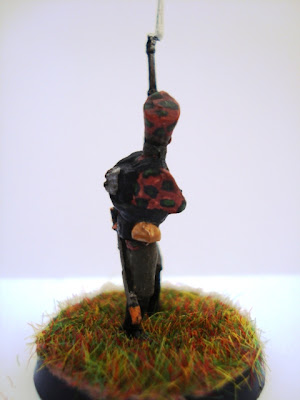 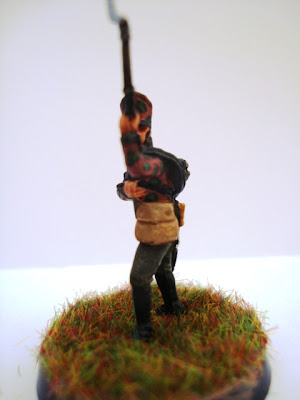 I showed the figure to Maurice last saterday on FIGZ and he liked it! It was a fun day by the way. Pictures on the event can be seen here. More about that meeting later on this week ;-)
And a warm welcome to the new followers of my blog:
Steve from Little Legions, Olly Vessel from Ollyvessel and Mojo (sorry mate couldn't find your blog. If you have one, place a link in the comment)
Welcome to my blog!!!!!
Gepost door peter op 11:31 7 opmerkingen: